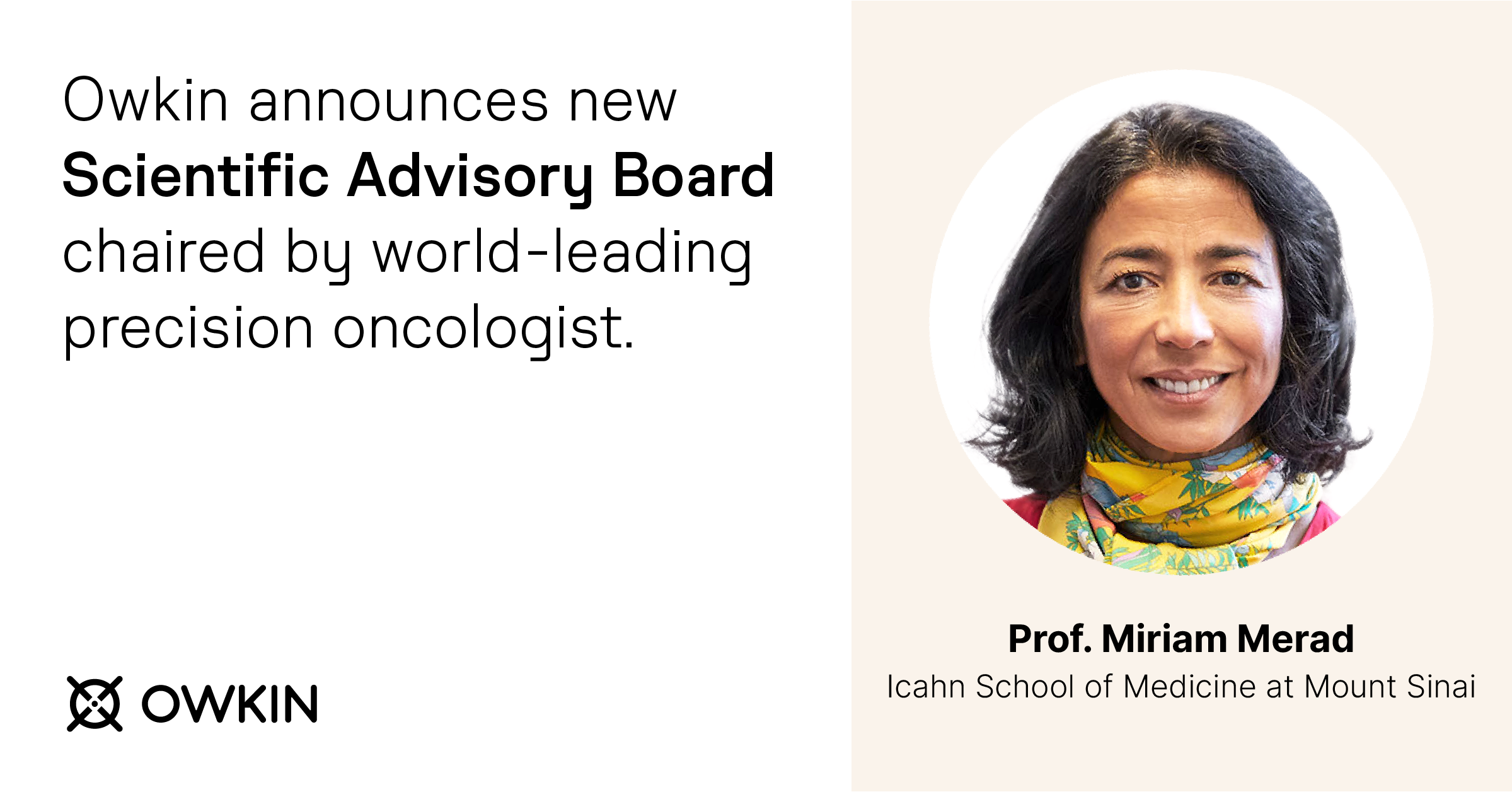 French-American AI for medical research startup Owkin today appointed ten advisors to its Scientific Advisory Board, including professors from leading academic research hospitals across the world.

The Scientific Advisory Board will work closely with Owkin’s team to supercharge its mission to augment medical research. It will bolster Owkin’s clinical expertise, while strengthening and expanding Owkin’s ties with leading academic institutions and pharmaceutical partners across the world. It will also help to increase the number of hospitals and research centers benefitting from Owkin’s federated network.

The Scientific Advisory Board will be led by new chairwoman Professor Miriam Merad, Director of Precision Immunology Institute at Mount Sinai (PrIISM) and the Director of the Human Immune Monitoring Center at the Icahn School of Medicine at Mount Sinai.

Founded in 2016 by clinical hematologist Thomas Clozel MD and AI-for-biology pioneer Gilles Wainrib, Owkin now works with leading hospitals, research centers and pharmaceutical companies across the world. The company became a ‘unicorn’ in November 2021 through a $180 million investment from pharmaceutical company Sanofi.

“Crucial to Owkin’s success thus far has been our emphasis on collaboration with scientists and clinicians at ​​the very best academic, medical and research institutions.

“AI is not an end product – it is an interactive tool that enables new scientific and medical discoveries. It is amazing to be surrounded by the best scientists and physicians to do just that.”

“Owkin’s Scientific Advisory Board will help to turbocharge our work with researchers across the world, helping us to achieve our mission of using AI to find the right treatment for every patient.” 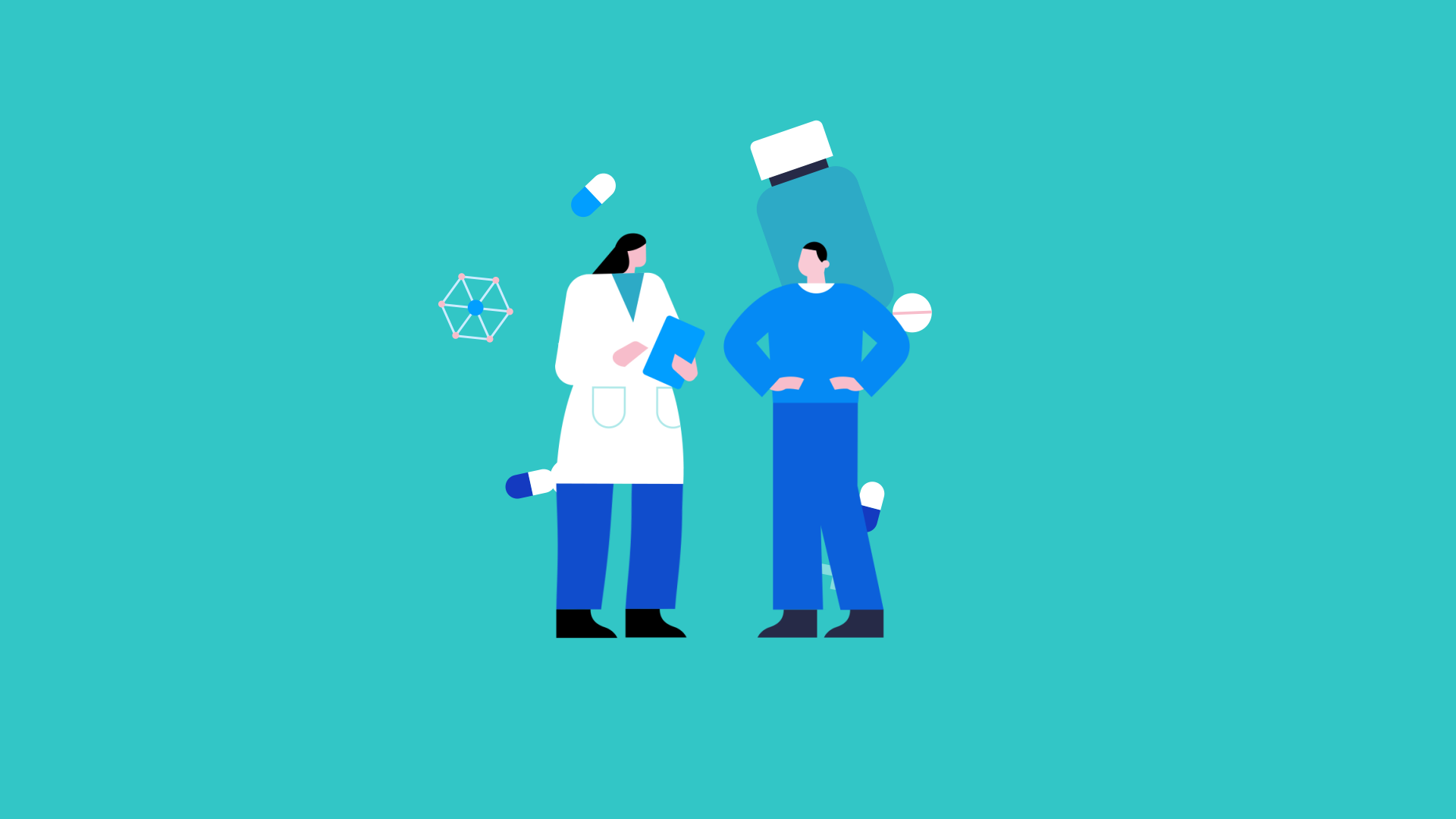 “I am excited to join Owkin's Scientific Advisory Board to help bring a new era of AI tools to medicine. AI has the potential to significantly enhance the way that patients are treated and Owkin is at the forefront of this exciting field.”

Professor Shahrokh Shariat, Head of the Department of Urology at the Medical University of Vienna, said:

“Owkin combines the power of trials, labs and data sciences to converge towards the delivery of personalized value-based medicine. Thanks to Owkin's sophisticated computation and inference, together we have generated insights, enabling us to reason and learn, and empowered our decision making.

“Owkin is already impacting healthcare, and it is hoped that these and future successes will transform urologic healthcare with the goal of eradicating suffering from urologic diseases.”

“Owkin is leading the use of AI for prediction and drug discovery in cancer. It has developed methods to detect predictive signals where the human brain can’t. Together, we developed a pathology tool to predict relapse in early stage breast cancer patients in one year, while we struggled for many years to do it with other teams."

Miriam Merad, MD, PhD, is the Director of Precision Immunology Institute at Mount Sinai (PrIISM) and the Director of the Human Immune Monitoring Center (HIMC) at the Icahn School of Medicine at Mount Sinai. She is also a Professor in Medicine, Hematology, and Medical Oncology at The Tisch Cancer Institute at Mount Sinai. Dr. Merad was trained as a Medical Oncologist in Paris University and did her PhD studies at Stanford University.  Dr. Merad is an internationally acclaimed physician-scientist and a global leader in immunology. She is the President-elect of the International Union of Immunological Societies (IUIS). Dr. Merad is an elected member of the American Society of Clinical Investigation and the recipient of the William B. Coley Award for Distinguished Research in Basic and Tumor Immunology. In 2020, she was elected to the National Academy of Sciences in recognition of her contributions to immunology, which transformed our understanding of how key components of the immune system work in different organs and diseases. Miriam will receive financial compensation from the Owkin for her role. 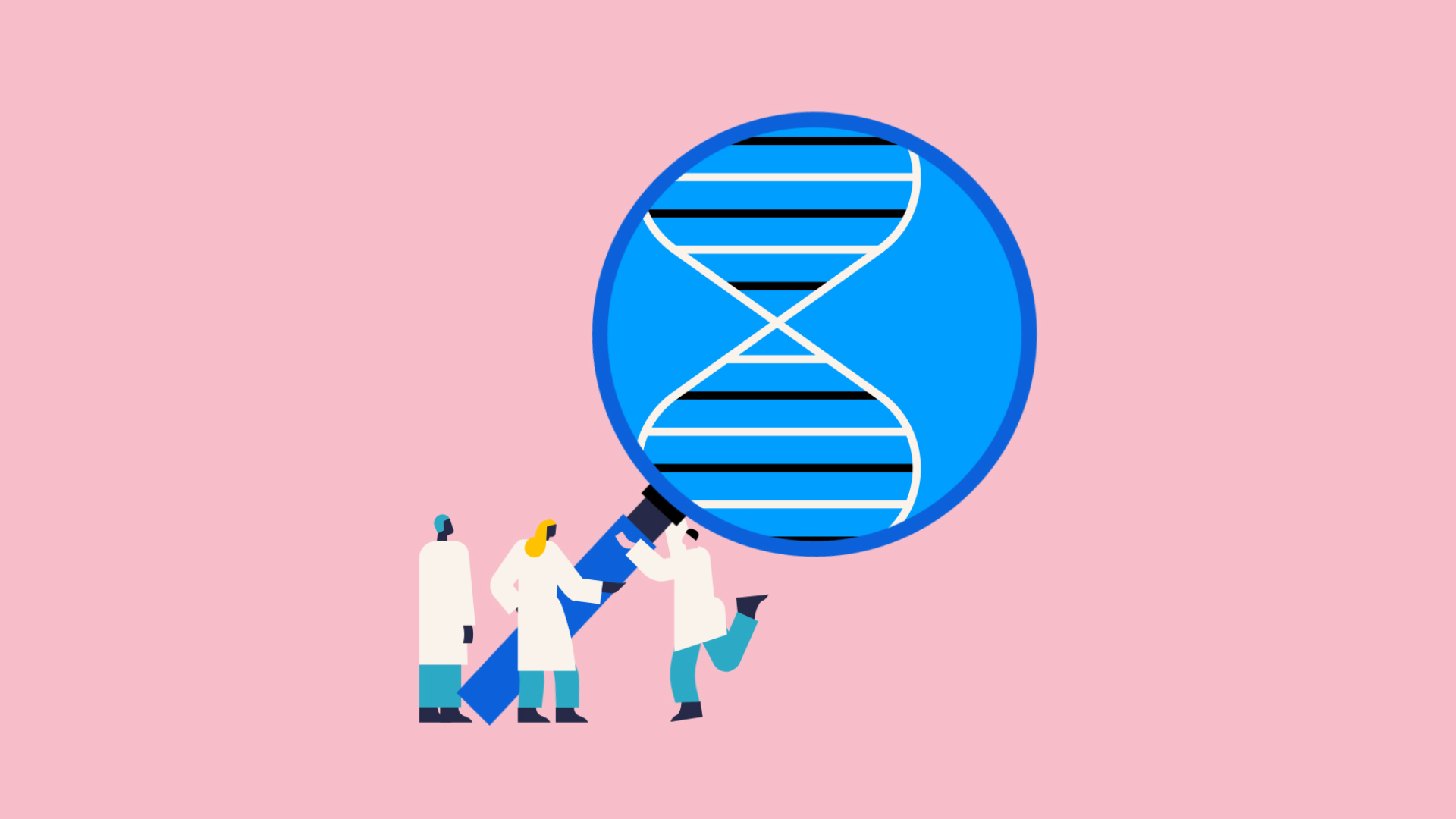 Fabrice André, MD, PhD, is currently Director of Research and Professor in the Department of Medical Oncology, Institut Gustave Roussy, Villejuif, France. His research work in the field of biomarkers and personalized therapies focuses on biomarker discovery, development of targeted agents and implementation of personalized medicine. Professor André is chairman of the biomarker group at UNICANCER (French cooperative group) and has been a member of the ESMO Educational Committee since 2009. He is also currently chair of the ESMO Translational Research and Precision Medicine Working Group.

Jean-Yves Blay MD is a medical oncologist, Director of the Centre Leon Berard, the Comprehensive Cancer Centre of Lyon, France, researcher and a professor at the University Claude-Bernard Lyon 1, France. Since 2019, he has also been the President of the French Federation of Cancer Centers Unicancer and the Network Director of the European Reference Network for Rare Adult Cancers (EURACAN). His work focuses on sarcoma, genomics and targeted treatment of cancer, immuno-oncology, and the relationship between tumor immunologic microenvironment and malignant cells, with the goal of clinical applications in the field of diagnosis, prognosis and treatment.

Professor Olivier Elemento, Director of the Caryl and Israel Englander Institute for Precision Medicine at Cornell University in New York

Olivier Elemento is a professor of physiology and biophysics at Weill Cornell Medicine and Cornell University. Since 2017, he has been Director of the Caryl and Israel Englander Institute for Precision Medicine, a multidisciplinary institute that draws on more than 100 faculty members from nearly all basic and clinical departments at Cornell University. Its mission is to use genomics, artificial intelligence (AI) and other technologies to develop and bring highly personalized medicine to patients at WCM’s affiliated hospital, New York-Presbyterian Hospital (NYPH), and elsewhere.

Professor Nicolas Girard, Head of the Curie-Montsouris Thorax Institute at the Institut Curie and Institut Mutualiste Montsouris in Paris

Nicolas Girard is Professor of Respiratory Medicine at Versailles Saint Quentin University and Head of the Curie-Montsouris Thorax Institute. He is a pneumologist specializing in thoracic oncology for the treatment of patients with lung cancer or rare thoracic cancers. He is experienced in the treatment of thymic tumors—thymomas and thymic carcinomas—as part of his work in the RYTHMIC network. He leads several clinical and translational research projects aiming at improving the treatment of these cancers, from the understanding of immune responses, to integrated AI approaches.

Jakob is a physician, scientist and assistant professor at RWTH Aachen University in Germany, with additional affiliations at the NCT Heidelberg and the University of Leeds. His research is focused on applications of artificial intelligence in cancer, in particular on predictive biomarkers for targeted treatment and immunotherapy. His clinical duties include Gastrointestinal Oncology, Gastroenterology and Medical Intensive Care. His research has recently been published in Nature Medicine, Nature Cancer, The Lancet Digital Health and other international journals.

Raphaël Rousseau, M.D., Ph.D. is Chief Medical Officer at Neogene Therapeutics. Prior to this, he was Executive Vice President, Head of Development and Chief Medical Officer of Gritstone Oncology from 2017 to 2021. Prior to Gritstone, from July 2012 to March 2017, he served as senior group medical director and global franchise head, pediatrics of Genentech. Before Genentech, he was senior medical director and lead of the pediatric global development team at Roche from October 2010 to June 2012, and international medical leader, hematology, at Roche from January 2009 to September 2010. Before joining Roche, Dr Rousseau was a professor of medical and pediatric oncology at the Université Claude Bernard in Lyon, France.

Dr. Roger Stupp is a medical oncologist and neuro-oncologist and a leading authority on primary and metastatic brain cancer. Dr. Stupp is the Paul C. Bucy Professor of Neurological Surgery, Professor of Medicine (Hematology/Oncology) and Neurology at Northwestern University Feinberg School of Medicine and Division chief of neuro-oncology in the Department of Neurology. He serves as the Co-Director of the Lou & Gene Malnati Brain Tumor Institute and Associate Director for Strategic Initiatives of the Robert H. Lurie Comprehensive Cancer Center of Northwestern University, Chicago. Dr. Stupp has been the lead investigator for numerous clinical trials from first-in-human phase 1 to pivotal phase registration studies.

Gilles Salles, MD, PhD, is the Chief of the Lymphoma Service at Memorial Sloan Kettering Cancer Center in New York, US, and Professor of Medicine at Weill Cornell Medical College, Cornell University. He has previously held a position of Professor of Medicine at the University of Lyon, and head of the Department of Hematology at the Hospices Civils de Lyon, in Pierre-Bénite, France. Professor Salles is especially interested in the clinical and biological study of Lymphoma. Professor Salles has been involved in the investigation and development of new therapeutic agents, such as several targeted therapies, new monoclonal antibodies and other immunotherapies in the field.

Professor Shahrokh Shariat, Head of the Department of Urology at the Medical University of Vienna

Shahrokh Shariat is Professor and Chairman of the Department of Urology at the Medical University of Vienna, University Hospital Vienna, in Vienna, Austria. Prof. Dr. Shariat has been researching and publishing his findings in the field of urological oncology since 1997, especially on the forms and effects of bladder cancer and prostate cancer. He has published more than 1,570 peer-reviewed research papers (Scopus h-index 113, 51593 citations; Google scholar h-index 135, 72198 citations), 600 non-peer-reviewed papers, and 26 book chapters. He is the holder of four patents stemming from his research into prostate and bladder cancer, and is the recipient of various national and international awards. He is an editorial board member of various journals including European Urology, BJU International, World Journal of Urology, Current Opinion in Urology (editor in chief), and Immunotherapy among others.